Snacks You MUST Try At Walt Disney World

Obviously I'm a huge fan of Walt Disney World. It's just a magical place for me, and if I could afford it, I'd go several times a year. One of my favorite things to do is to try the new foods--there's always new snacks, or sometimes there's just something on a menu that I know I need to order whenever I go.

My son and I recently went and tried SO much food. Like seriously. So much. But I felt since we walk a ton, that it's okay. I never get when people talk about watching what you eat on vacation. Heck no. I'm on vacation. I'll pig out. And I'm not afraid to talk about how much I adore food. Especially the pretty foods.

So without further ado, here are some snacks (or regular food items!) that you need to try the next time you go. (Disneyland probably has many of these too. Honestly, Disneyland seems to have the better snacks. If you YouTube Disney snacks, most of them are at Disneyland.)


Behold this beauty from the Satu'li Canteen: 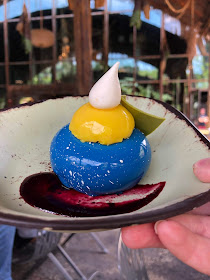 It looks like it's from another world, because it is. It's a dessert from Pandora at the Animal Kingdom. It's called the Blueberry Cream Cheese Mousse. It's a fixture on the menu, so you should always be able to get it.


Right next door is Pongo Pongo, which is a small stand of snacks and drinks. You MUST get the night blossom: 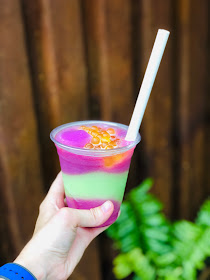 It's a mixture of limeade with desert pear and apple. There are boba balls on top. This drink is a bit sour, but not so much that it's gross. My son can be picky, and he loves this. If you aren't into the boba balls, you can get the drink without. This is another fixture on the menu and yes, you can get one with alcohol too.


If you head to Port Orleans French Quarter, you can get beignets shaped as Mickey. They don't skimp on the powdered sugar either. They gave us beignets loaded with sugar. 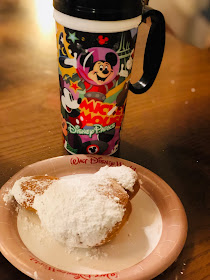 If you love beignets, you can get the beignet burger too. There's a sweet and savory thing going on. My son loved it! 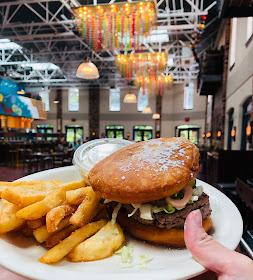 If you're heading to Disney Springs, you need to check out Amorette's Patisserie. It's this fabulous place filled with desserts.


I knew I wanted to try the Mickey dome cake because, well, look how cute it is: 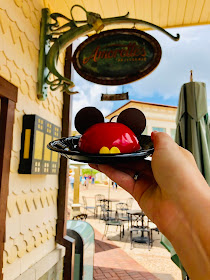 Inside was chocolate cake and buttercream. On the outside is fondant. The ears are chocolate. I absolutely LOVED It. You can get it in a larger size too! 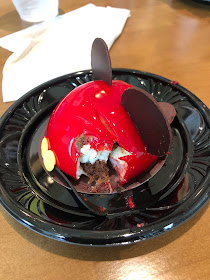 Back at the Magic Kingdom if you head to Tomorrowland, there's a place called The Lunching Pad, and they sell these fabulous giant donuts. You can get them in strawberry, vanilla, or chocolate. 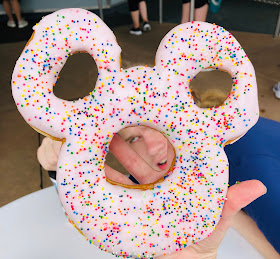 At this point my son was getting tired of me taking pictures of the food. "I'm hungry! I just want to eat!" Sorry, son. The donut is delicious though. Not dry at all. I hope this sticks around because I want to try the other flavors.


Still in the Magic Kingdom, you can get a Rapunzel eclair from the Pinocchio Village Haus: 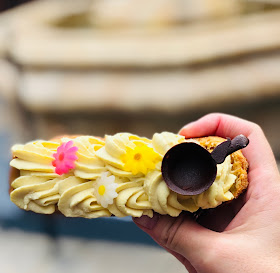 It's filled with dulce de leche, with white chocolate whipped cream. The flowers are sugar candies, and the frying pan is chocolate. I thought this was tasty; my son did not because he didn't like the consistency of the inside. This might be a specialty item, so I don't know if it'll always be around. 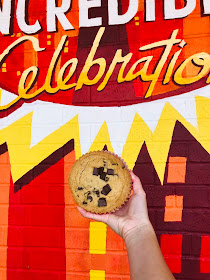 It's a giant chocolate chip cookie. And yes, it's warm. It was fabulous. Now, on super hot days I can see how this would be a mess. It was hot when we were there, but we had just had a rain storm, so our cookie didn't make a mess. We gobbled it right up. I would say it feeds two. Maybe three if you aren't a giant pig like we are.


At the same place, you can get the Secret Identity slush: 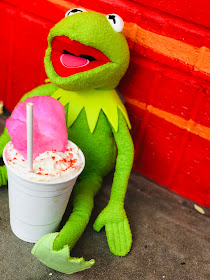 It's basically a coke icee with whipped cream, pop rocks, and cotton candy on top. My son doesn't like whipped cream, so he got to eat most of the cookie. I thought it was amazingly sweet, but I do love my Coke!

In Toy Story Land, there's Andy's Lunchbox, and we wanted to try the lemon-blueberry lunch box tart. This is a limited time only tart, and I imagine it goes away after the summer: 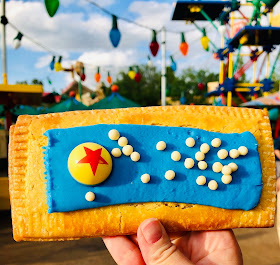 Yup, also delicious. The fruit flavors were spectacular, and it just looked cute in general. Inside is the lemon, and the frosting is the blueberry.

For dinner we ate at the ABC Commissary, and I had to try Mickey's Sorcerer's Hat: 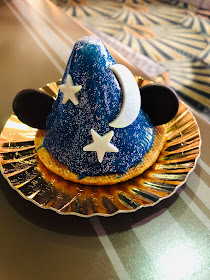 It's a lemon sponge cake with buttercream frosting, lemon curd, and a white chocolate glaze. Plus fondant as the blue cover and stars, and chocolate for the ears. My son and I gobbled this down. I hope this stays! I want to get it again! Also, that is a cookie at the bottom. Also, there's edible glitter.

Now we head to EPCOT.


I knew I wanted to try the Rose Gold cupcake because yes, I am a rose gold fanatic: 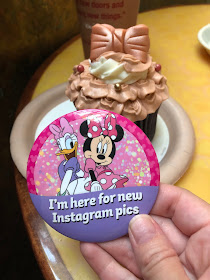 I found it in the Sunshine Seasons (located at the ground floor of where Soarin and Living With The Land are)  and I admit, I was hesitant, because there was a hazelnut swirl inside, and while I love hazelnut, sometimes it makes the cupcake tastes weird. However, it was Rose Gold, so I went for it, and I'm glad I did. I loved it! It's made of vanilla with the hazelnut swirl I mentioned, rose gold buttercream, fondant bow, and chocolate pearls. Oh, and I had to get the button from parkbound buttons, because it's true.

If you head to Norway, check out the Kringla Bakeri Og Kafe, and you'll find the lemon cheesecake: 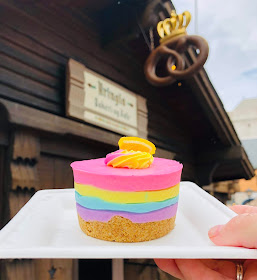 You'll get the graham cracker bottom, plus layers of lemon cheesecake. They are all the same flavor. On top is whipped cream and a candy fruit piece.  It is pretty large, so I say it could feed 4 people. I had to eat it on my own. My son has sensory issues and can't take the consistency of cheesecake. I couldn't finish it. But if you're looking for an Instagram-able snack, this is it.


France is one of my favorite countries to eat at. Whenever I go, I MUST get the Raspberry Macaroon: 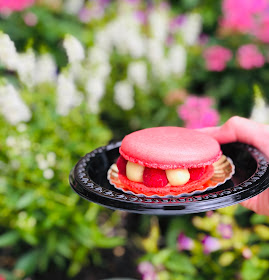 Normally Tommy doesn't even LIKE macarons, but he loves this one, so dang it, I have to share. The raspberries taste fresh, and it's paired with lime cream.


Back to Magic Kingdom. Most of the delicious snacks live there.


My son tried the Mickey Celebration Burger at Cosmic Ray's and yes, I had to get the Mickey sipper: 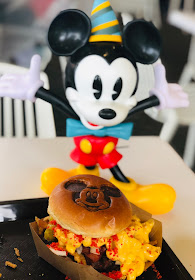 I tried a bite and it's tough to eat because it falls apart. So grab a knife and fork! Oh, what's on it? Okay, so much. You get the meat, bacon, mac and cheese, cheese sauce, and a dusting of hot cheetos. My son passed on the cheese sauce, so this his is without it. My son and I were fans! Two people COULD eat this unless you have a teenage son. In which case, get your own, because he wolfed this down. (It's not cheap. It's $15.99, but at least it comes with fries.) This might not stick around for long. I believe it's just for Mickey's Celebration year, so after 2019, it could be gone.


By the Teacups ride is the Cheshire Cafe, and I knew I wanted to try the wonderland slush: 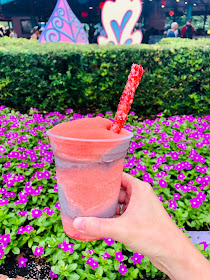 It was a refreshing drink in the heat. It's a mixture of grape and cherry. Or maybe it's strawberry. The straw has candy on the outside, but it's paper on the inside, so it will fall apart eventually. So try to drink this fast!


I also needed to try the Cheshire tail, which is basically a pastry filled with chocolate: 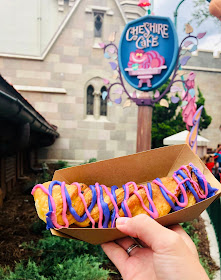 I am nearly done.

The Sunshine Tree Terrace in Adventureland has some tasty treats that I believe are only around for a temporary time.

For example, this Aladdin donut celebrated the movie, so I'm not sure if it's there anymore: 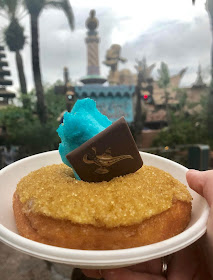 Like the other donut we tried, this one was fresh. And there's glitter sprinkles, so that excited me. The tuft of cotton candy melted pretty quickly in the heat. 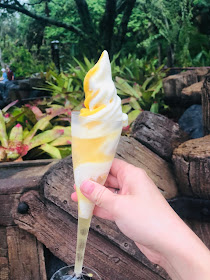 So it's Apple Cider with a mixture of orange dole whip. You can get the pineapple one, but I stuck with orange. This is another drink to cool off with in the heat. I hope they keep this one! I know dole whips are super popular and don't get me wrong, I love them, but I like mine paired with something.

So those are the snacks we tried. The reason I could try so many is because A) I saved money to make sure I had enough for snacks and B) I had my teenage son who is like a garbage disposable. He's ALWAYS hungry. So if I just wanted to try a bite, I knew the rest wouldn't go to waste.

No, I didn't eat these snacks in one day. We were there 4 days, so they were spread out.

Would you believe that I didn't even get to try all the snacks I wanted to? Some days I got too full to have anything else. Also, I was running low on snack money. Dang it. But I SO wanted to try the Lost Princess Cone and the Peter Pan Float at Storybook Treats. Not only are they pretty, but I hear they are tasty. Try one for me, okay?


What is your favorite snack to have when you go to Walt Disney World? 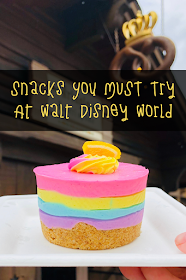